The advantages of boarding school: a student perspective

“No matter what age or year level you begin boarding, there is a significant contribution boarding makes to your life.”

While it is important to weigh up the pros and cons of boarding when deciding on this option for your son, often the best advice comes from the students themselves. It is for this reason that we asked three Scots boarders, two present and one past, to explain the advantages of boarding school.

As a younger student, I vividly remember how integrity and tolerance were built, while living with others day in day out. Our ability to read a situation became important, as was our ability to come together and look after one another. A major benefit of boarding is that through these communal experiences, I have learned to understanding the needs of others, and have been able to implement the values I have learned as a Senior student and Prefect.

As my Scots boarding journey progressed, I came to realise that boarding sets you up in a way being a day boy cannot. Your exposure to facilities, academic resources and social interaction is a great advantage and at the forefront of a Senior boy’s repertoire for being a boarder. Without doubt, despite academic, sporting and co-curricular commitments, boarding gives you both structured study and leisure time to effectively balance your life and manage your time during the busy times of your schooling life, such as your HSC Year.

The most beneficial part of making the decision to board is that you are guaranteeing yourself a wide network of friends. Mixing with boys from all areas of New South Wales, Australia and the world sets you up with a number of connections you will more than likely take advantage of, many years after leaving school.

Every boarding house has a mixture of boys, including country boys, city boys, coastal boys, Indigenous boys and international boys.

Upon talking to my Dad about this, an Old Boy of ‘83, he stated with no doubt in his mind, that the best part about attending a boarding school was developing connections from far and wide. He even went as far to say, “If I broke down in any town in New South Wales, I would know a mate close by who would have me stay for the night.” It is this network of friends that you make along the way that tops off the boarding experience.

The benefits of boarding at Scots have been profound and far-reaching. I began boarding at Scots after living in a small community in central New South Wales and it has changed me for the better. It has allowed me to grow socially and interact with many different boys.

Boarding has given me the opportunity to build strength of character and has enabled me to grow in areas such as resilience, by living with a wide range of boys coming from completely diverse backgrounds. Dealing with different characters in a boarding community has built strength of character that I may not have previously had. It has also allowed me to build special bonds with boys that I previously not would have the opportunity to socialise with. These bonds are everlasting and I now have friends for life.

Boarding has also taught me to mix with boys younger than me and make friends with everyone, not just those in my own year, something that a day boy would not normally experience. It has given me the opportunity to fit into a supportive culture that has encouraged me to develop as a person. Boarding also provides us with access to teachers from almost every subject area, which has been an enormous help with my academic work.

Other benefits of boarding include:

Scots boarders have been a vital part of the Scots community for over a century. For more information about boarding at The Scots College, contact our Admissions Team or download our Boarding Prospectus. 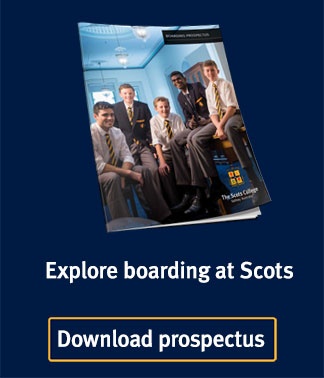 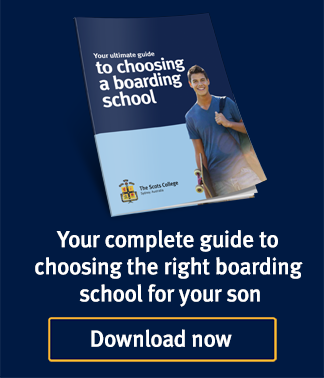