From Rugby and Cross Country to Rowing, Snowsports and Cricket, sport is synonymous with the Scots experience, encouraging boys to discover personal strength born of competition and camaraderie.

For the College's weekly sports fixtures please download the following:

Overview of sports offered at The Scots College:

At The Scots College we aspire to be a leader in strength and conditioning programs offered to our students. The College's facilities feature an outstanding weights room, spinning room and ergo room.

Athletics at Scots is not only about training boys to run faster, jump higher or throw further but to equip young men with well-rounded life skills including resilience, dedication and teamwork. Scots' athletes are encouraged to give their best whether it is at training or in competition.

The Scots College Basketball Club is recognised as one of the premier development Basketball programs in Australia. The Club's 'Athlete Pathway' is a skill development pathway from Years 3 to 12, where athletes have the opportunity to be mentored from current and former NSW, NBL and WNBL coaches and players.

Due to the heavy workload, physical and emotional demands of competitive sport, the Senior programs are structured to include additional study and tutorial support three afternoons per week before training. Athletes are expected to parallel their athletic excellence in the classroom, ensuring a well-rounded balance between physical and academic development and performance.

The Basketball Club travels overseas every two years to Canada and the USA to compete in large, well regarded high school tournaments. Our teams also feature at the Australian National Schools Championship each year.

The Scots Cricket program is a Transition to Year 12 skills based program that exposes players to some of the best coaching in the country. As a result, a number of players from the Scots Cricket Program have made Cricket NSW representative sides.

Skills sessions are regularly recorded and players' actions and techniques are analysed. This analytical approach complemented by reports, physical strength and conditioning results, and game day statistics, assists the College in tracking the progress of each player.

The combination of skills sessions with individual and team sessions, make for a strong training program that is second to none in schoolboy cricket.

The College offers an environment designed for the continual improvement and ongoing development of Scots cricketers.

Cross Country running is becoming an increasingly popular sport at Scots, with over 70 competitors from Years 7 to 12.

Competing schools are awarded points throughout the season for individual achievements by runners, as well as team points for the first four runners from each school across the finish line. While the College encourages individual achievement and goal setting, a core value of mateship, camaraderie and the overarching success of the College team is promoted as a core foundation for the boys' success.

Cross Country runners develop skills of endurance, determination and resilience. Each runner has personal goals but gains additional satisfaction in being part of a team.

Football is a rapidly growing part of the College and is enjoyed by almost half of all Scots boys during the winter sports terms.

In recent years, the College has employed a great number of highly experienced coaching staff who are passionate and dedicated to improving the standard of Scots Football. Combined with in-house teaching staff (each with considerable expertise in the sport), The Scots College Football Program is leading the way in schoolboy football.

The coaching program focuses on teaching the boys technical skills, developing a strong sense of resilience and determination, teamwork and social responsibility.

Rifle shooting is one of the oldest AAGPS sports still competing today. The Scots College Rifle Shooting team has represented the College at competition level for over 80 years. Rifle shooting is a sport that requires skill, precision, calculations and mental strength.

The Scots College Rifle Shooting team is stronger than ever before and is establishing a fresh new approach to the sport with the help of new equipment.

Rowing is a big part of The Scots College culture and is enthusiastically embraced by our boys. The Scots College Rowing team is a competitive club, well resourced and positioned on the Parramatta River at Gladesville.

The College is focused on improving its oarsmen with a highly developed sense of resilience and determination, a focus on teamwork, and an honest commitment to strive for excellence.

The programs are written and reviewed by experienced trainers, with reference to AIS standards and the College is committed to seeking continuous improvements in the offering of this outstanding sport.

The Scots College delivers one of the leading Rugby programs in the country competing in one of the strongest schoolboy Rugby competitions in the world. The College runs over 40 teams across the Preparatory and Senior schools, with the 1st and 2nd XV competing in the high performance environment of the AAGPS Rugby Competition.

Communication and collaboration between Rugby coaches and academic colleagues ensures that attitudes and achievements are transferrable between the Rugby field and the classroom. Consequently, we have students who are high-achievers in both domains.

In the past five years, a number of Scots players have represented Australian Schoolboys and gone on to professional Super 15 academies.

As Rugby Sevens will soon be an Olympic Sport, the College is proud to have created a platform for all young aspiring Australian Rugby players to work towards an Olympic goal.

The Scots College Sailing is based at Woollahra Sailing Club, Rose Bay, where scenic Sydney Harbour provides a perfect venue for sailing. Competition is of a high standard against other schools from around Sydney. The program has extended to the Preparatory School where boys can experience sailing at an early age.

In addition to fleet racing, Scots' sailors partner with the Cruising Yacht Club to sail on larger boats to encourage teamwork and cooperation. The boys have a wonderful opportunity to excel and are given a chance to represent NSW or Australia at a school level in Teams Racing.

Snowsports at the College began in 1980. Since then, regular trips and development programs have catered for students of all skill levels. Overseas trips provide opportunities for students to ski in other countries and experience the cultural diversity of various regions of the world.

The race team is open to all students and gives all boys the opportunity to excel through a program of dry land training, on-snow training, and an established competition schedule.

The TSC Snowsports Academy was established in 2011 to cater for the needs of Snowsports athletes. It allows boys to balance their academic education with Snowsports training. The athletes spend 10 weeks at the Academy during the snow season combining essential access to on-snow training with the school curriculum.

Click here for more information on The Scots Race.

The Scots College Swimming team is highly competitive in the AAGPS competition and displays good team spirit and a competitive nature.

Swimming is divided into two groups:

Swimming is a sport that allows boys to mix across age groups. This builds a sense of community that is valued by the boys.

The sport of Table Tennis at The Scots College is a highly skilled, fast paced and tactically challenging Summer Sport. Where players hit the ball at over 100km per hour and spin the serve so acutely that it turns 90 degrees.

The Scots College have been the leaders in offering an outstanding Table Tennis program and have pioneered the Invitational competition. Our impressive results include state representation and the most successful Division 1 side in the 2015/2016 Summer competition.

Tennis is continuing to grow as a sport at The Scots College. Programs are offered for boys in Transition to Year 12 in both training and competitive matches.

High Performance Coaching has been a key focus for the College over the past three years. These coaches direct the program, each bringing a variety of playing and coaching experience from junior programs to grand slams.

The world-class facilities at Scots enables the boys to achieve their true potential.

The newest of the winter sports, Volleyball has been a wonderful addition to the sports choices for Senior students.

Volleyball suits a wide variety of boys as the sport demands rapid court movement, considerable hand-eye coordination, prediction of future ball placement and the need for static and running jumps, and power control.

The game is fun, dynamic and exhilarating.

The Scots College introduced Water Polo to its Sports program in 1988. Today Scots is one of the most successful schools in NSW both in competition wins and representative honours.

Water Polo at this level of competition is a physically demanding sport requiring a high level of fitness. 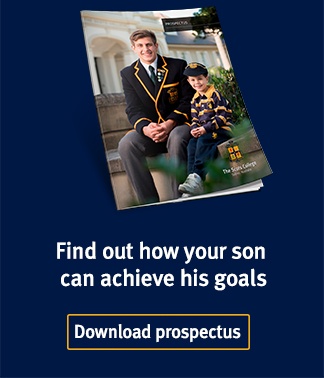 What others are saying

"Being a Scots boy means having a sense of pride and integrity. Being Head Prefect will be the most memorable experience of my time at Scots, because it gave me a chance to leave a positive mark on the College that has been such a big part of my life."

"Being a Scots boarder has given me the opportunity to experience the wide variety of cultures that are a part of the Scots community. Boarding has also developed in me a strong sense of independence and I leave Scots with the knowledge that I can overcome any challenge I encounter in the future."

"When I arrived in Australia I was concerned that my English wasn't strong. Being a part of the Scots community, I was encouraged to get involved and as a result I became more confident in speaking the (English) language. I now have the confidence to be the man that I want to be."

"Attending the same College as my father (Graham Bursill, '59) has enriched the bond between us. The world today demands that people have the ability to adapt to new challenges. The College offers a wealth of experiences that are invaluable in meeting these challenges."

"I have been very thankful to attend such a wonderful school. Scots has given me a greater appreciation of what I have. Scots is in a prime location (can't get any better), provides Glengarry, which is amazing and I have been able to board with so many students from different walks of life. I've loved it!"

"What I love about the learning program at Scots is that it is tailored just for you!"

"What I love about Scots is the depth and breadth of opportunity. Somewhere in the great range of subjects, co-curricular and sport activities provided... there is a place here for everyone."

"My experience at The Scots College has been about making connections with my mates and their families; not just going to a school to memorise text books and win awards. Scots is a place with rich opportunities; here I have discovered who I am and how I can best help the community."